Paying Calls in Shangri-La: scenes from a woman's life in American diplomacy 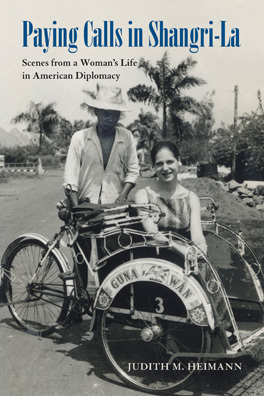 Judith M. Heimann entered the diplomatic life in 1958 to join her husband, John, in Jakarta, Indonesia, at his American Embassy post. This, her first time out of the United States, would set her on a path across the continents as she mastered the fine points of diplomatic culture. She did so first as a spouse, then as a diplomat herself, thus becoming part of one of the Foreign Service's first tandem couples.

Heimann's lively recollections of her life in Africa, Asia, and Europe show us that when it comes to reconciling our government's requirements with the other government's wants, shuttle diplomacy, Skype, and email cannot match on-the-ground interaction. The ability to gauge and finesse gesture, tone of voice, and unspoken assumptions became her stock-in-trade as she navigated, time and again, remarkably delicate situations.

This insightful and witty memoir gives us a behind-the-scenes look at a rarely explored experience: that of one of the very first married female diplomats, who played an unsung but significant role in some of the important international events of the past fifty years. To those who know something of today's world of diplomacy, Paying Calls in Shangri-La will be an enlightening tour through the way it used to be—and for aspiring Foreign Service officers and students, it will be an inspiration.