This link to the publisher, Wageningen Academic Publishers (WAP), will offer a means to buy the book for $32.00 per paperback copy, and that price includes shipping to anywhere and no VAT if the order comes from the U.S., U.K., Canada, Australia, or New Zealand. Purchasers ordering from elsewhere should check with WAP for details on possible VAT charges on sales to that country. An electronic version will also be available to purchase after November 22nd. 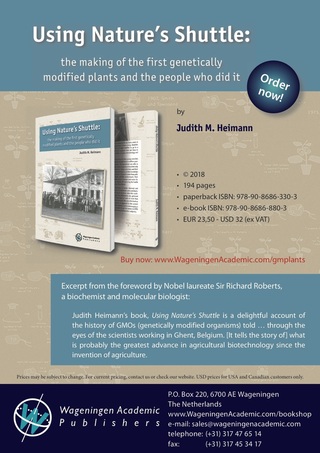 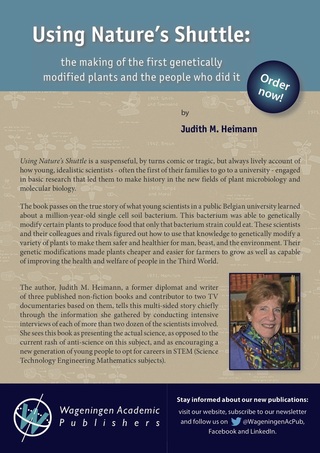 Using Nature's Shuttle: the making of the first genetically modified plants and the people who did it

biochemist and molecular biologist, 1993 Nobel Laureate in Physiology or Medicine

Judith Heimann's book, Using Nature's Shuttle, is a delightful account of the history of plant GMOs (genetically modified organisms) told in a very informal style through the eyes of the scientists working in Ghent, Belgium. Beginning with the discovery that certain bacteria could transfer their DNA into plants, Marc Van Montagu and Jeff Schell realized that this natural process could be used to transfer other DNA into plants, which could both speed up plant breeding and extend the traits that could be introduced. Seeing the great benefit this might bring to agriculture in the developing world, they spent their lives pursuing this goal, only to see it undermined by politically-driven anti-GMO groups.

This denigration of what is probably the greatest advance in agricultural biotechnology since the invention of agriculture continues to this day, as described in a heartbreaking later chapter.  To aficionados of biotechnology, this book offers new insight into the persona of the scientists who developed the GMO method and the ups and downs of their science and the impact it had on society.

I am guessing that most of what you first heard or read about genetically modified plants, seeds, or products came from news reports of popular protests against them. Perhaps it was one of the stories about the "March Against Monsanto" movement which began in early 2013 and was a mass movement by May of that year. The Associated Press, among media giants, reported on May 25th that there were hundreds of rallies that day across the U.S. and in more than fifty other countries. The organizers of the "March Against Monsanto" claimed there were two million people worldwide who participated that day to draw attention to "the dangers posed by genetically modified food and the food giants who produce it."

Non-partisan witnesses do not seriously doubt the numbers of protesters that day, nor their sincerity. One of the early organizers is quoted as saying: "We will continue until Monsanto complies with consumer demand. They are poisoning our children, poisoning our planet.  If we don't act, who's going to?" Since then, the European Court of Justice has weighed in, in July 2018, against virtually the entire world scientific community, to reject all gene-edited crops, focusing their displeasure on the process of gene editing even when there is no discernible difference in the gene-edited product (the plant) from non-gene-edited plants.

Against this background, I am here to try to present to you the actual facts about genetically modified plants (widely known as GMOs): who first made them, how and why, and whether GM plants or products present any danger to people or to the environment. I operate from the principle that everybody is entitled to his/her opinion but not to the facts. I started looking into the facts about GM plants some months after the March Against Monsanto, but by then I already knew that Monsanto was a late-comer to the GMO story. By then I also knew that the GMO story had begun in Belgium, of all places, in the early 1970s, in a public university, in a lab headed and staffed by idealistic young scientists, most of whom were the first of their families to have received a higher education.

My story draws chiefly on my interviews of the scientists involved. And "in the interests of full disclosure," as the news reporters say on public radio, I want to tell you how I got into the act.

The idea for this book was first suggested to me in October 2013, months after the March Against Monsanto. I was sitting among a group of Belgian biotech plant scientists and next to geneticist Jeff Schell's widow, Betsy, having dinner under the dome of the Iowa state capitol building in Des Moines. We were there to witness a friend, Marc Van Montagu, a Belgian biochemist who was the scientific partner of the late Jeff Schell, receive the World Food Prize -- along with two other scientists from different American labs (one of them Monsanto's). Marc was being given the prize for having, alongside Jeff, directed the Belgian lab that had discovered the initial facts and processes that led to the creation of GM plants.

The Belgian sitting next to me said, "You know, somebody should write up our discovery -- how it happened, who did it, who helped, the mistakes, the bits of good luck, and all. It is a thrilling story. But we scientists haven't a clue how to write it so that ordinary non-scientists could understand it and enjoy learning about it. We need a book that gives the reader the sense of being there at the moment of discovery." And then he looked directly at me before saying, "Why don't YOU write it?"

I hesitated a moment, while the waiter cleared away the soup course. Science was not my subject and I had never written about it. The only assets I had that might help me were that I already had published other kinds of nonfiction books for a general audience; I know Belgium, having lived and worked there for many years as an American diplomat; and I have known several of the leading GM plant scientists for decades.

Then I thought: Maybe I could make a plus out of the fact that I know so little about science. My goal should be to learn from the scientists enough of what they did, and why and how they did it, so that I could explain it to people like me. That is what I have tried to do in writing this book.